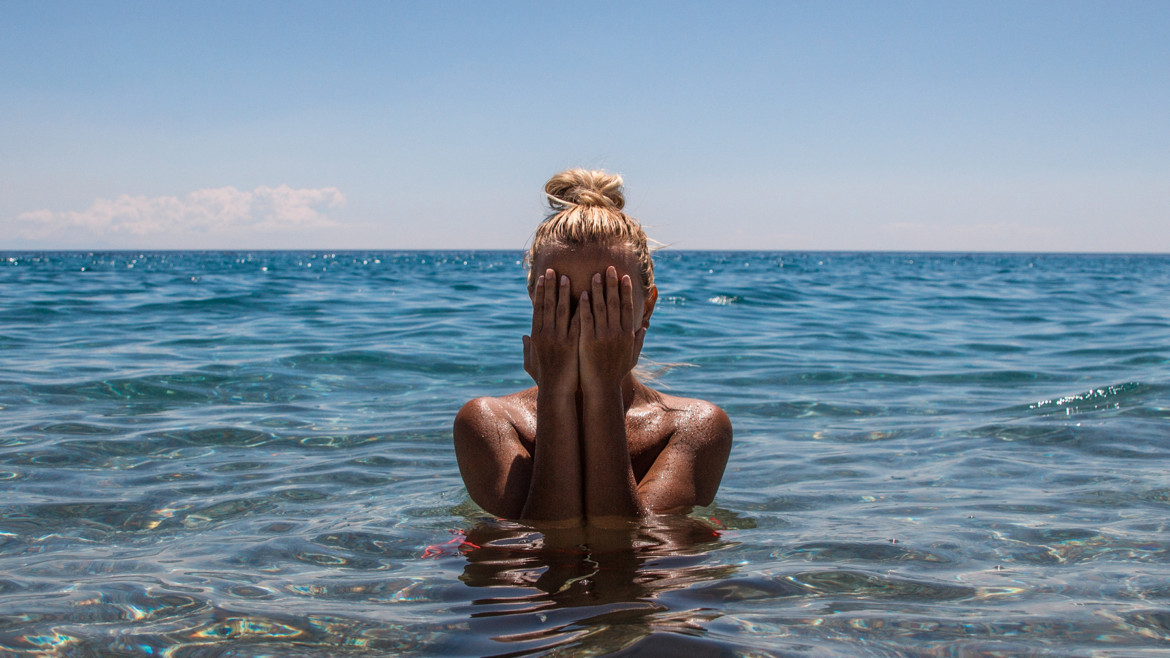 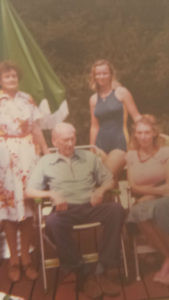 I sliced through the water of my suburban New Jersey condo complex’s crystalline lap pool this weekend. I sucked the sticky air. I expelled my breath under the surface and gurgled chubby, wobbly bubbles. The two-step breathing rhythm I employ for the breast stroke comforts me with its regularity.

Back and forth I went. Ten full laps! A great beginning for me to summer and efforts to exercise more.

Above image: Photo by Rakicevic Nenad on Unsplash

Right image: Me, arriving home from a lake swim, I am summoned for a photo with my beloved grandparents and Aunt Grace. Even as a college student, I remember thinking I was too fat to wear a bikini. (Allendale, N.J., circa 1980)

Weirdly, however, I had the pool to myself most of the time. At one point, an elderly woman ambled across the shorter span in a path perpendicular to my track. She did not see me; I pivoted right to avoid colliding and kept swimming. The staccato sounds of splashes and happy shouts from the recreation pool mixed with the steady hum of soft-voiced parents in conversation. On this, my first visit to the pool complex, I had expected to see hundreds crammed into the area, like the municipal pools I frequented when my children were small. Instead, I spotted far less — about 25 people, a number that included swimmers and anyone else.

Within the space of the past week, two people who don’t know each other have informed me that they would never consider swimming in public. One person, a heavy-set neighbor, told me during a parking lot conversation that he had never once entered the pools in the 25 years he has lived here. “Swim?” he said. “No.” Another person, a close friend who I would not describe as overweight and who I know men find very attractive, looked at me in shock when I invited her to my pool. “Not on your life!” she said. “I have no intention of ever appearing in a bathing suit anywhere!”

What’s going on here? Swimming, whether it’s dipping your feet in the shallows of the ocean, or easing into a lap pool, is a joy of life. It’s refreshing. It’s fun. It’s a great, low-impact form of exercise. How could anyone deny himself or herself that experience?

For one thing, we have been experiencing a rise in the number of overweight Americans since the mid-Seventies. No one is sure what is causing the trend. Some say the food we eat is too fatty, salty, processed or laden with high fructose corn syrup. Others say modern life – sedentary, competitive, workaholic, overscheduled – could be causal factors. Perhaps technology, such as television and video games, is key. Contrarians point to the notion that a highly successful public health effort to stop cigarette smoking over the past few decades may have turned itself inside out, causing ex-smokers to obsess about food instead. Some have gone Biblical, attributing the rising obesity statistics to gluttony and sloth.

On one key point, however, the experts are sure: Once a person gains weight, it is nearly impossible to lose it and keep it off. And the diabolical corollary to this is that the difficulty of losing weight is directly proportional to the extent of pounds gained. Translation: It is much harder for a fat person to lose weight than it is for a lean person to do so. 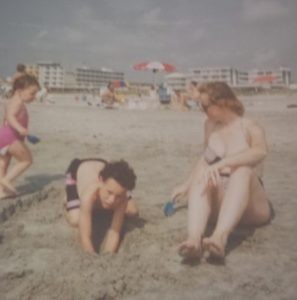 On the beach in Wildwood, N.J., in the 1990s with some of my kids. Despite strenuous aerobics, I was still unsure whether I was slender enough to wear a two-piece.

Daily, we immerse our minds and bodies in a soup of digital media, an onslaught of data directed at our senses, much of it highly visual. We exist in two worlds – the real and the virtual. In the online universe, where we spend an increasing amount of time, images of fat people barely exist. When they do, they are often objects of ridicule, shamed by cowardly anonymous commenters.

What we mostly see in digital regions are people who, in novelist Tom Wolfe’s words, are “starved to perfection.” There are no lumps or sags or cellulite-addled thighs. There are no Dad bods with beer bellies, and no wrinkles. Full-figured Americans, who now represent a healthy proportion of the population, earn meager representation in cyberspace. I am not arguing against good health. Standard medical practice dictates maintaining a healthy weight, though the definition of that term is elusive. The height and weight charts many physicians use are outdated and do not take into account a variety of body shapes and muscle densities.

How can we end this proclivity for shaming people about their bodies? Is it really any person’s business what someone else looks like? Why are we so affronted? We know that scapegoating is common to groups and a fixture of social media. Parents have been the latest targets, demonized for being human and looking away from their active kids for a moment or for being unable to discern danger in the shallows of a human-made lake fronted by sand and beach chairs.

When did it happen that we got sucked in to believing we are not good enough for the impossible expectations set first by the movie, TV, and fashion industries and now by the all-encompassing digital world? When did we stop distinguishing between reality and fantasy? Why is my neighbor embarrassed to swim? From whom did my friend learn that she did not meet the bar for public display?

I know what it’s like to be overweight. I’m happy to say I am now losing some pounds I gained while attending to a family illness. With the help of some people who love me, I have finally met with success. Like many, I have made myself miserable over many years struggling with notions of body image. I look at old family photographs of me as a college student wearing a swimsuit. I look fine. No one but me would know that the young lady pictured saw herself then as too fat to wear a bikini. When I was a young mother, aerobics classes helped me work off the baby weight from multiple childbirths and I ventured into the world of wearing a two-piece. Still, I worried I was not thin enough to pull it off.

Like my college self, I’m back now to the one-piece suit, but for practical reasons – it is much easier for lap swimming. No parts shift or peel off in the water. Why do I swim when others stay away?   I do it because swimming makes me happy. While it’s still a struggle, I’ve beaten back the self-doubt that’s been present for so long.  I choose to no longer worry about whether I live up to strangers’ expectations.

I get angry when I learn that people cannot enjoy a healthy, fun activity because others are judging them. And I wish I could return to the past and tell young Kitta that she is perfectly okay the way she is. Let’s give it a try, shall we? Let’s go easier on ourselves. And let’s stop stealing other people’s joy. 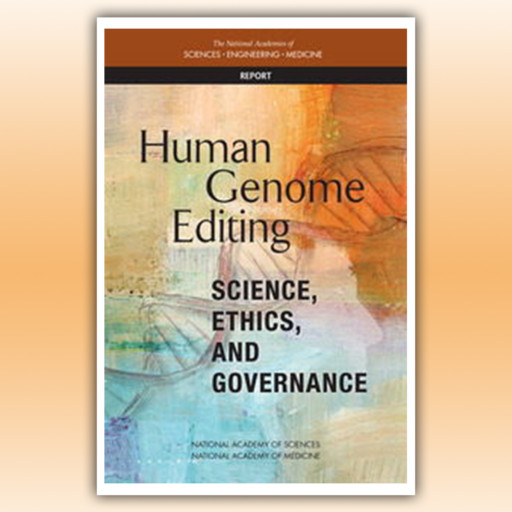 Aldous Huxley, Where are You?

Scientific advances have made genome editing easier, spurring an explosion of ...